22nd of Rajab is celebrated with supplications to Allah azwj, praise and remembrance of Masomeen aswss’ contributions and sacrifices for the purpose of establishing Allah azwj’s recognition and saving entire universe from destruction. A specially prepared feast is also offered to brethren in Eman along with denouncing the enemies of Ahlul Baita sws. A centuries’ old tradition, regularly commemorated by the followers of Ahlul Baita sws, and is referred to ‘Niaz’ Imam Jafar-e-Sadiqa sws. We have briefly described, below, preparation and offering of this feast.

In order to prepare Niaz it is suggested that followers of Ahlul Baita sws should get up early in the morning of 22 Rajab and should clean the house and purify themselves by taking Ghusal (bath/shower), put on fragrance (etar) and lit agar bate/use air freshener in their home and spread a clean ‘tahir’ sheet in a clean room. One should make sure all the utensils to be used in the preparation of niaz are clean and Pak.

Make dough of approximately one kilogram and a quarter of flour ‘mayda’ and prepare 14 pieces of bread ‘pooriyan’ and short sweet bread ‘tikiyan’ (which are sweet bread and small in size like pan cakes) and fry them in oil. Prepare some semolina ‘halwa’ as well or kheer, a traditional rice pudding.

For khas niaz take out 7 pooriyan and 7 tikiyan and some halwa in clean and pure pots and place the pots containing Niaz facing Qibla. After praying Fajar prayers read the following mojiza of Imam Jafar-e-Sadiqa sws‘s offer niaz, and make  prayers.  One should take extra care in consuming khas niaz and it is better not to allow any one to take the ‘khas niaz’ i.e. the selected portion, out of the house as it is considered disrespectful. The other food to be prepared may be given out to take away by momaneen. The niaz is also part of a celebration, a day on which Allah azwj relieved momaneen from one of the worst Muslim rulers, who was trying to kill and eliminated shian-e-Ali sws. 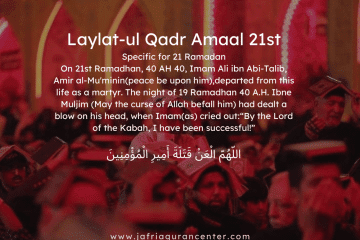 It was Friday 13th of Rajab 30 Amulfeel. Hazrat Fatima binte Asad, the wife of Hazrat Abu Talib entered the precincts of the Kaaba and prayed to Allah saying ‘O my protector ease my pain.’ All Read more…